THIS is the price of, while you WON'T acknowledge it, being a "public figure", though you're looking at an uphill battle that will roll you over as anyone whom you have cited as "friends spreading rumors" can link to videos and words that YOU'VE said and done.

ANY knowledge of your accusations belong to YOU and the parties that you've named. 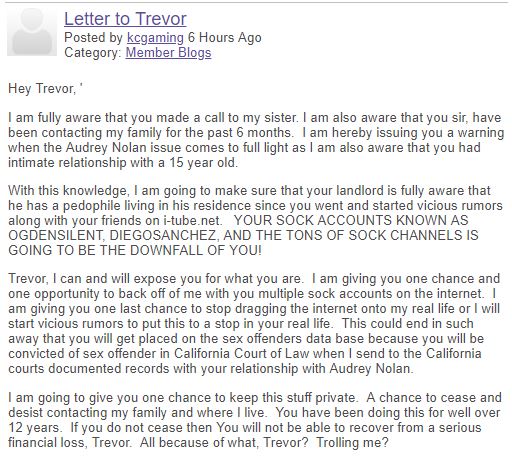 You didn't just...wake up and suddenly became a meme.

You worked DILIGENTLY at it.  DAILY.  For YEARS.

Collectively, we wish you well in your current and future trades, crafts, professions, life, love and longevity, BUT we'd state that we have NO ties to any rumors of this claim that your are making.

EVERY FUCKING YEAR it's something with you.

Goes for the Long Pass and trips and FALLS ... Dammit ...

How about you holding yourself accountable for your own shit?  You sit here and say that I get what I deserve but yet, who was the person who blew shit up and blamed me for shit When I was on Vloasis the entire time and was dragged onto this website for something Argent did because he was banned on Vloasis?

Why do you think them people is not on i-tube, MBD?  You sit there and blame me for shit and then you do not like it when Trevor is on your website.  Yet, you do not know why I bring up your shit hole website?  All you will do when shit comes down on this website is blame me for all of your shit just like you did on this website when you decided to drop my docs through your own members.

I am not going to argue with your bullshit claims of innocence.  You speak on truly neutral ground if you want to speak.  This website is no longer a neutral website like it was in the past.