I would like to submerge myself, for the purposes of experimenting, into this MineCraft game you keep on plugging in all your videos as of recent.

Please post a video telling me, in detail, what I must do to sign up - what I have to pay and where I go to experience this world of yours.  And if I join, can I play against you?

Lay it on me.  Curious minds want to know.

I know that you have missed me.  In my absence, I have been studying and catching up attaining my Doctorate degree.  I figured I would take a break and post this edition of "An Important Message From Taylor".

I would seem as if Phantom409 has now found, yet another, gimick and BS project that is "one of a kind" and will be a huge money-maker - in MineCraft - one of the crappiest, most grapically challenged games online…

First of all, I would like to remind Phantom409 that today is November 12th and your suspension from Vloggerheads should be lifted.  Ironically enough, there won't be much of an audience over there anymore.

It seems that Mr. Frank decided to be original - NOT - and open up his own vlogging site.  Yeah, it's on Ning.  And yeah, it's the same as this and Vloggerheads.  And yeah, it's a handful of Vloggheaders over there.

It seems as though, I, like Phantom409, must use this medium - in which I was most graciously welcomed - to respond to the allegations being made about me by certain people on Vloggerheads.  I am not posting this to anger anybody here.  Only to reply to the remarks posted over there.

Skibby:  Dude, first Renetto bitch slapped you.  I will never forget that.  Then, you desperately seek Lima.  She has no interest in you.  You were butthurt.  And NOW…

AN IMPORTANT MESSAGE FROM TAYLOR

Sorry for my absence.  I have had some personal business to attend to.  Am I to correctly understand that RealMan100000, or whatever number you choose, is here on I-Tube?

To Phantom:  Today is October 29th.  Shouldn't you be back at Vloggerheads?  Have they permabanned you instead now?  Seeming as though ZenArcher is back over there now - I believe you should follow up on your rants and begging to return over there.

At A Loss For Words 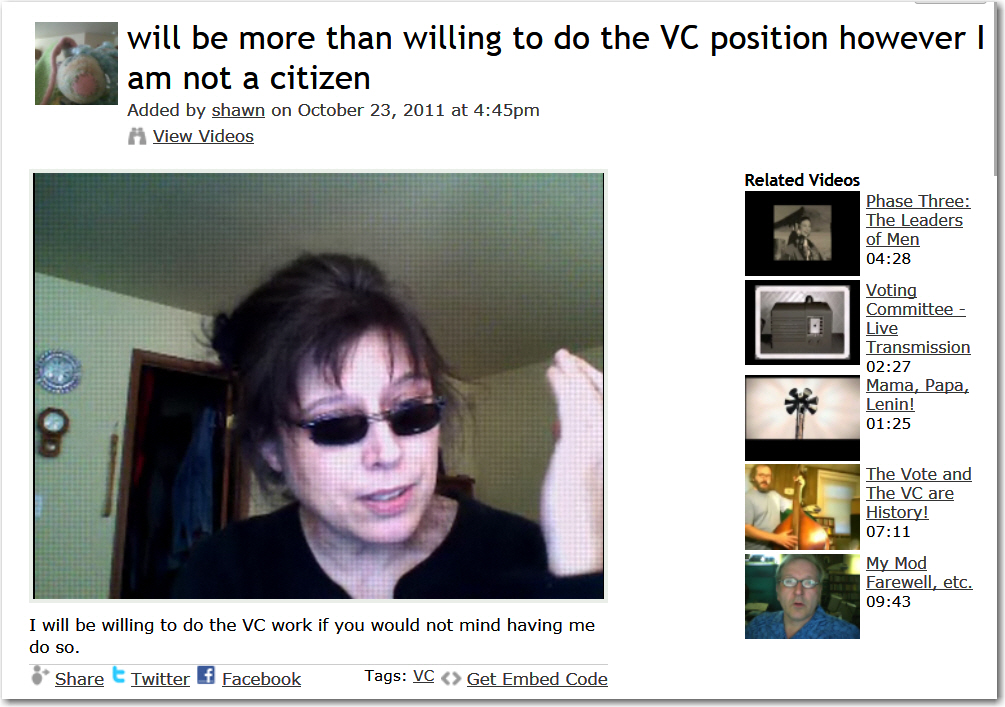 As is becoming more and more clear, Phantom409 is hungry for drama.  He drives drama.  It follows him.  He is drama.  His latest episode with this "Bravo" character is further proof that he is like a fish out of water without such nonsense.

It is also evident that Phantom feels he speaks on behalf of the admins here, if not one of them himself.  I know that Phantom has his own Ning site but he has no members.  Still, he posts a ranting video over…

First off, to Phantom: Can you please change your username back to Phantomvision or Phantom409?  PhantomBabble was NOT funny.  Will NEVER be funny.  And it's old now.

Phantom: stop trying to reinvent yourself.  Just be yourself.  Don't keep trying to be something you are not or somebody you are not.  Just accept that you're an average Joe trying to survive, with a history of being banned from Vloggerheads.  That's it.

Congratulations. I have said it before and I will say it again - not to inflate my head - but to state the truth: Taylor knows best.

Now, as seen by Marcel's desperate post, they are watching and reading our stuff. Of course, the hypocrisy thing is still there. They would have people believe this site is too lowly to visit. Well, they are. And taking screen shots, lol.

So, as you can see, things are shifting. They are using our stuff for… Continue

DO NOT GO TO VLOGGERHEADS

Yes, this is my second blog of the day. But it is important. I would ask, that none of us go to Vloggerheads. They are doing a good enough job at self destructing from within, so now if none of us go over there - then they handful of people who are there will, well, be simply talking to themselves. That's it.

In the meantime, this site will gain new members, grow in content and in interactions. Of course, in order for this to work - we all gotta do… Continue