This dickhead got one of my i-tube videos removed by the DMCA for copyright infringement when it was my own material on that NING site owned by MeanBlackDude...

I wish I had a ramp. I can't get out of my house at all. Were you able to get disability to install that for you or did you move into a place that had one?

Someone here wanted to shovel my wheel chair ramp but I was asleep and broke anyways.I managed to do this myself.NING claimed they would put that video back but it`s only a video and I lost so of them just deleting channels myself over the years,I could care less about it.It felt good shovelling my ramp off but I will feel it tomorrow I guess.Thanks Rare.I will load more videos here now.Peace hun :0)

I have dealt with enough disfunctional people like the one who I allowed to live in my home to know what have really have went on here.I`m not getting in between a vlog war or taking sides.It is all silly and some people have too much time on their hands and invent ways to get attention.i could care less who did what.I just it`s fucked up to geta strike because of someone`s foolishness.I am too busy dealing with keeping warm and watching for my reviews I went back to doing for the fun of it.All parties involved,have an awesome weekend and stay warm :0)

Cosmic I like your take on his Fuckery ... It's like talking about phantom409 Almost like picking on a Handicap .... makes you want to kick the crutches out from under Him ...

I've just proven it Kenny. You claimed you were going to DMCA the videos, the very next day the videos (along with others unrelated) were all DMCA'd under your fake name, coincidence? I think not. But prove it? I only need to prove it to the people you've wronged and they're already convinced, the consequences are what will happen to you from all of these people. You keep thinking this has something to do with laws and rules, fuck that shit Kenny, you've gone beyond that, you're in much deeper shit than worrying about someone suing you or having you arrested, you've gone deep into the realm of people wanting to go to your motel room and beat you to a bloody pulp. Don't say you weren't warned. I don't have to do shit either, it'll be done for me by people much better able to handle it.

I'd say without a doubt moving would be his best bet right now. He's just pissed off a whole bunch of people including some people who he thought were on his side. I wouldn't be shocked to see him banned from every website he's on soon too. 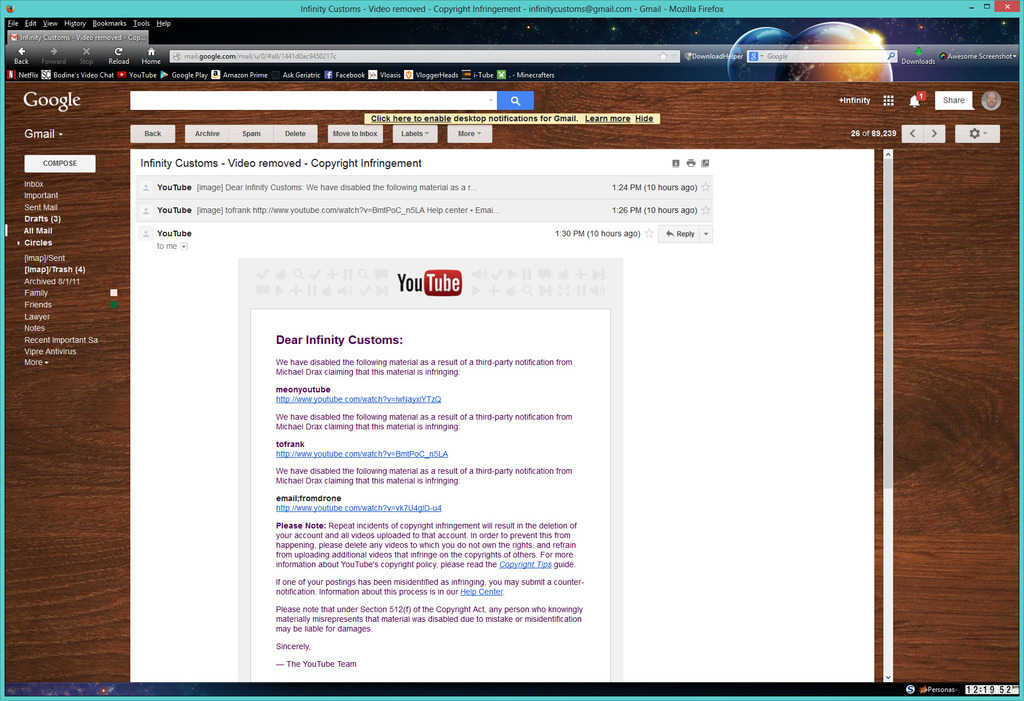 As you can clearly see here, same name as the person who filed the DMCA's on i-Tube in this YouTube DMCA form. Nice try at covering your ass Kenny but you fail miserably every time you do.

Kenny, I and Joe both have emails with the exact same name, Mike Drax, which was the same name and all other information used on the YouTube DMCA's, keep trying to lie your way out of everything sunshine. Your ass is going down, hard.

He's after her because she's a friend of mine, it's the same reason he's on your case now, he likes to attack the ladies, same as JFry, typical bully. That punk is going down, hard.