...Ya still think those things are only normal jet contrails?! ... hmmmm

and save this one to your drive:

Another important figure (at least to me) died.

This guy was one of the pioneers of New York graff art. He will be missed. 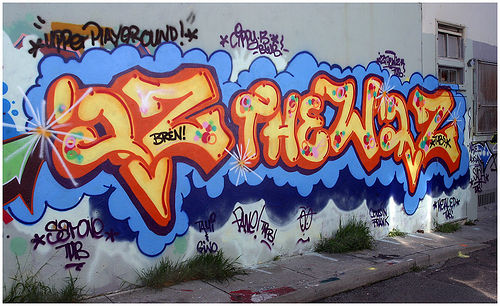 Normally, as a Free Speech advocating libertarian kind of a Conservative; I do not have a problem with people speaking their minds. But this sort of idiotic nonsense is totally uncalled for:

Film producer/director Oliver Stone, a far-left promoter of conspiracies who is working on a sequel to his 1987 ‘Wall Street’ movie, declared on Friday night’s edition of HBO’s Real Time with Bill Maher that “Reagan was a dumb son of a bitch” and “I really think George W is…

The First Amendment in trouble… again

The Fairness doctrine, hate speech laws coming before Congress, radio talk shows being bullied by boycotts. Well, here we go again. The fact of the matter is that we never got it right the first time around. President Adams threatened to jail protesters for speaking out on American-......French relations, until Jefferson told Adams, “Not…
Continue

While we mourn celebrities...

This is still going on.

So about Michael Jackson...

Ha ha ha!!!! He's dead!!! Yeah!!! Get out your noise makers and your party hats baby!!! One less pedo!!! They shouldn't even bury him! They should just kick him off a cliff, dust off there hands and take the rest of the day off!

Fron Cynthia Mckinney: I Sent a Message to the President about My Trip to Gaza . . .

If I can't get a response from the White House, the Israelis certainly are paying… Continue

So many famous people dying

We neglect to think about who it will most hurt. Michael Jackson passed away today at age 50 and I can think of only one person who will truly need our thoughts to be with him in his time of need.

EDIT: I couldn't take thatkidparkers mug that large on my front page anymore.

Everyone log in with your girl avatars immediately for baw circle jerk fest...

what a day RIP MICHAEL AND FARRAH, ALSO ED

what a day, first farrah, now michael jacks? ed just passed a few days ago, seems to be true stars pass i 3's just in shock!

could it just be me

is anyome else experiencing trouble adding new video?
thanks sarafina

dis site is so much sweeter with u bein here Brett!! dont let da fuck trolls get to ya. they jus jealous cuz u sucessful author whos got ballz of steel & arent afraid get on webcam & challenge theist beliefs. u inspire me to keep up with viral vids & remind me dat there is still hope left in humanity. me has bought all ur books & will continue buying cuz u need more funds to get ur points accross. more folks who hear ya da better!!

injoy ur father's day. ur kids must… Continue

Folks in the free world may chatter all they like about Apple's sleek new iPhone, but citizens on lockdown must rely on more antiquated forms of communication.

Inventive inmates at facilities around the country speak jail cell-to-jail cell using their commodes, a phenomenon known to wardens, correctional officers and attorneys as "toilet talk."

Some toilet talk is mundane. A pair of inmates might call out chess moves. Some prisoners have used the sewage pipes as a conduit… Continue

Join us right now on BlogTV!!!

The show has ended for this weekend. You can click on the link below and visit our channel page to subscribe if you haven't already:-)


DramaTubeLive- Broadcast your self… Continue

Join us on TokBox?

on front page.... who knows for how long

A real-life case of 'Final Destination'
European couple Johanna and Kurt Ganthaler narrowly escaped death when they missed their flight home. The Ganthalers had been vacationing in Brazil and were running late to the airport, causing them to miss their scheduled plane.

The incident that more than likely frustrated the couple, turned out to be fortunate as the flight that they would have boarded crashed in the Atlantic Ocean, killing all passengers… Continue

The 30,000 to 40,000 people filling Haft-e Tir Square to protest the Iran election seems just a fraction to those taking to the Internet to do the same. While the human element remains an essential tool of social protest, technology’s power to usurp government censorship continues to evolve.

In 1989, the vanguard of social networking technology came in the form of a fax machine purchased by Chinese students studying at the University of Michigan following the massacre in Tianamen… Continue

I missed you. Now fucking entertain me.

Hello! So our laptop got drowned by the lovely Ms. Mother Nature...how sweet of her (silly BITCH!) We finally were able to get another one. I know I don't normally blog stuff but I wanted to say Hello to everyone at once. I've missed this fucked up site and all of you fucked up peoples here...hahaa! I hope everyone has been happily wallowing in Dramas while we were offline. I'm sure you have been.

May you all never step on a skinless clown while wearing no socks or shoes...it's a… Continue